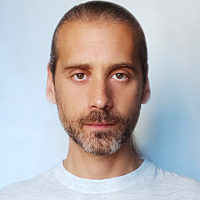 My name is Gabriele Ceracchini, I am an author and director of audiovisuals.

I am the founder and general manager of a company called MAIOR, through which for five years I have been developing a new and revolutionary form of audiovisual entertainment called “Multifilm”, which could be described, synthetically, as a movie able to “entertain infinitely”.

Different from a traditional movie, the Multifilm is not made to be seen only once or twice, but any amount of times you desire.

Each new vision is different from the others, varying subject, screenplay, acting, editing, and music in an automatic way (not on the basis of the viewer’s preferences), partly decided by the author, partly random (thanks to the support of a specific software), following a different path each time.

Apart from the continuous changing, the main features that will push the viewer to make a large number of views of the same work are two:

1) The Multifilm does not extinguish its narrative potential in one single viewing.

On the contrary, as the viewings go on so does the general comprehension of the story which, apart from configuring itself every time in a different way, will leave many questions unanswered.

For example the story’s prequel, or the motives behind a certain character’s behavior, can be understood only through more viewings of the same Multifilm.

2) The story that is narrated, apart from changing, can evolve following a certain direction, which usually, but not necessarily, coincides with the protagonist’s objective.

For example, in a story based on vengeance in which the protagonist is weak and is forced to fight against a stronger antagonist, losing systematically, in the ongoing viewings the protagonist will manage to learn from his errors and become gradually stronger (or more aware) and will manage in the end to succeed in his goal. There are going to be in fact several possible endings, but just one “Grand Finale” in which everything is finally explained and in which the narrative journey culminates; but also this will be produced in different versions and therefore the entire work can be retraced several times from start to finish and still present itself in ways never seen before.

With this project we’ll shift from a “throwaway” form of entertainment to a form of entertainment which is virtually “inexhaustible”, which represents an even greater innovation compared to the transition from black and white to color, from mute to sound, from 2D to 3D, both from a conceptual and a practical point of view.

The multifilm allows you to create a serial film product with thousands of different episodes and bearing the same narrative mechanisms of a normal TV series, only proposed in a different way, at the cost of few traditional episodes.

Compared to other experiments done to this day in the audiovisual field, including the so called “interactive movies”, the Multifilm not only makes more sense and works better, but above all it is economically convenient; therefore it will inevitably become a new standard for the world audiovisual entertainment market.

The web configures itself as the ideal market since the amount of money that comes from the sponsors depends on the number or views which, in the case of the Multifilm, will be much higher than the ones of a traditional audio video product, because not only will it be seen by millions of people but each person will look at it hundreds if not thousands of times!

My project will change the way we do audiovisual entertainment all over the world.

I know you will be with me in this revolution!

I can't wait for it to start.