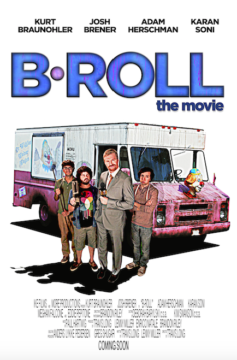 Triggered by the success of a rival, brash local News Reporter Owen Parker goes above and beyond on his next assignment and inadvertently starts a riot and offends a vast swath of the Native American population.

Now an unemployed pariah, Owen goes on a bender where he stumbles upon fledgeling news writer Andy. After a night of debauchery, Owen decides to team up with Andy, assembling a ragtag band of misfits to help him get his career back. Armed with nothing but a camera, a mic, and a repurposed ice cream truck, Owen and his team jump back into the world of investigative journalism. The Target? Mayor Kirk Kirkpatrick who Owen surmises is corrupt just by looking at him.

Not one to do any research on a story, Owen dives right into the story with a stakeout of the Mayor’s house to look for “dirt.” When the Mayor makes a late night run to a city garage where he escorts four city vans to a private dealership, Owen is convinced they have the lead they need to take him down for good: clearly the Mayor is selling city property for personal gain.

Owen and his crew ambush the dealership owner with cameras rolling, peppering him with questions about the vans. When it turns out the dealership was donating free maintenance on the vans Owen gets desperate and makes a scene, the whole thing captured on security cameras and covered by his old rival TV news station. Owen has gone from pariah to laughing stock.

A now disillusioned Andy quits the project while Owen doubles down, taking Nate and Doug on a late night break in raid of the City Hall records room. After studying a stack of stolen documents, Owen uncovers a decades long multimillion dollar money laundering scheme.

But the Mayor is aware of Owen’s efforts, and he dispatches a cop on his payroll to silence Owen and his team for good. After a crazy shootout, the crew barely escapes with their lives, and use the evidence to produce a documentary, saving their town from the grips of corruption and earning national acclaim.