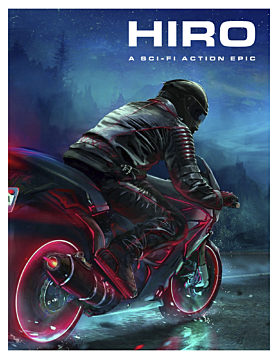 A grieving ex-soldier finds renewed purpose as he hunts down four war heroes responsible for a pregnant woman’s death.

HIRO is a sci-fi action adventure. Think The Matrix meets Akira, or Drive meets Kill Bill. Set near the end of the 21st century, we follow our motorcycle-riding hero along his journey of revenge, meeting colorful characters along the way. Action setpieces abound. There is danger, drama, humor, and thrilling adventure at every turn.

It is the year 20XX. The decade-long LUNAR WAR has ended after a Chernobyl-style meltdown at an ELECTRUM-mining facility on the moon. The moon is declared a Disaster Zone, evacuated, and quarantined. Any travel to the moon is outlawed. Meanwhile back on Earth, veterans of the Lunar War are struggling to adapt to civilian life….

We meet our protagonist — Hiroshi Gibson (35) aka HIRO. Hiro has a weekly chess game with his war buddy / mentor FRANK (55). We see flashbacks of a battle on the moon where Frank lost a leg and Hiro received a scar on his face. Clearly, Hiro is a tough dude who’s good in a fight and can use violence when necessary.

Frank has a daughter, MADELINE (27). She's seven months pregnant, and mourning the loss of her husband, who died in a suspicious accident. We see Madeline and Hiro interact. There is good chemistry between them. Maybe in different circumstances they would've gotten together. Madeline is headed to the hospital to have an ultrasound.

Hiro returns home that night and is shocked by a news broadcast that shows Madeline has died in a car accident. First her husband, and now her. Both suspicious deaths. Saddened and angry, Hiro vows to hunt down the men responsible. He links both deaths to a shadowy company called Moonstone, which is run by Four Colonels — all war heroes.

Hiro hunts down the Four Colonels one by one. First he goes head-to-head with WILD BILL SISKO (60) in a suspenseful poker game, followed by a quick-draw duel. Hiro nearly dies but defeats Sisko and uses the Colonel’s mobile phone to locate the next boss….

ANTONIO LEONES (55). Leones runs a shipping warehouse, where Hiro battles several thugs and genetically-enhanced attack dogs. Here he meets WARWICK (40), who is being tortured by Leone. Hiro defeats Leone and reluctantly takes on Warwick as his sidekick.

Together they ride out to the Z HOTEL — a super skyscraper set at the edge of the ocean. They infiltrate a nightclub and Hiro confronts ZANE PALMER (50), culminating in a rooftop duel with plasma swords. Before dying, Palmer reveals that — surprise! — Madeline is still alive! She’s being held at a secret mountain complex, the headquarters of the final boss — SIMONE BLACKWOOD (45).

Hiro and Warwick blast their way into the Moonstone compound, mowing down an army of robotic guards. Hiro has a final confrontation with Blackwood, where all is revealed...

During the Lunar War, the Four Colonels discovered a secret cache of Electrum on the dark side of the moon. They used it to found an arms company — Moonstone — which made them massively wealthy. They orchestrated the nuclear meltdown for two reasons — it ended the war and brought about a quarantine that guaranteed Moonstone had sole access to the moon’s Electrum supply. Madeline’s husband discovered all this, and so the Colonels had him killed.

A side effect of the lunar meltdown was terrible human mutations. Blackwood is convinced these mutations can bring humanity to the next level. Since Madeline was already pregnant, she was the perfect candidate to experiment on. Unknown to her, she was given electrum injections during her pregnancy. When her ultrasound showed a frightening life form growing inside her, they had to hush it up. They faked Madeline's car crash and whisked her off to the Moonstone compound.

Blackwood says that Madeline’s child will change the human race forever. As soon as she delivers the baby, they will kill her. Blackstone almost gets the best of Hiro, but Hiro defeats her. He and Warwick rescue Madeline and escape the compound.

Hiro returns Madeline to her parents and they have a warm, tearful reunion. We have our happy ending. But… she is still pregnant with a mutant child, so surely the peace won't last for long...

HIRO, 35. A veteran of the Lunar War who is trying to adjust to civilian life. He’s a man of action. Proficient in hand-to-hand combat, cool under fire. Loyal and courageous, he embarks on a mission of revenge when his mentor’s daughter is killed. Prototype Cast: Henry Golding, Jason Momoa.

MADELINE, 25. A beautiful mother-to-be who is mourning the recent loss of her husband. Becomes the victim of a dark conspiracy. Possesses an inner strength, a light that cannot be extinguished. A friend of Hiro, with whom she has great chemistry. Her death sends Hiro on his journey. Prototype Cast: Emily Browning, Jennifer Lawrence.

FRANK, 50. Madeline’s father. A friend and mentor to Hiro, whom he loves as his own son. They fought together in the Lunar War, where Frank lost a leg. A loving father with a warm heart and good sense of humor. When his beloved daughter is killed, he turns to Hiro for help. Prototype Cast: Bryan Cranston, Mark Rylance.

WARWICK, 40. A stuffy accountant who blossoms into a brave adventurer once he joins Hiro’s quest. A proper Englishman who fancies himself as James Bond. Enjoys the finer things in life. A bit of a dandy. Prototype Cast: Richard Ayoade, John Boyega.

ANTONIO LEONES, 55. A short-tempered motor-mouth with a sadistic streak. Runs a shipping company which is a front for criminal activity. In cahoots with Sisko and the other Colonels, with whom he shares a dark secret. Prototype Cast: Ray Liotta, Peter Dinklage.

ZANE PALMER, 50. A suave ladies man and proprietor of the Z Hotel - an oceanfront skyscraper with a lavish rooftop nightclub. A deadly opponent in any fight, especially when cloaked in a stealth suit. Provides Hiro with a shocking revelation. Prototype Cast: Michael Jai White, Idris Elba.

SIMONE BLACKWOOD, 45. The youngest, smartest, and most psychopathic of the four Colonels. A genius in weapon design and biological experimentation. Holds the final key to unlock the mysteries of Madeline’s death. Prototype Cast: Jodie Foster, Cate Blanchett.