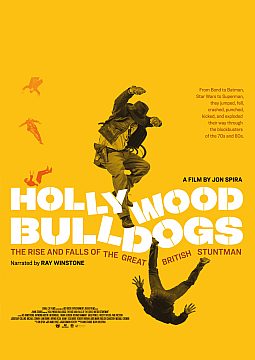 Hollywood Bulldogs - The Rise and Falls of the Great British Stuntmen

Tells the rough-and-tumble story of the small community of British stunt performers who went on to dominate Hollywood in the 1970s and 80s. Growing out of the ragtag community of bouncers, gangsters and de-mobbed soldiers who were prepared to take a punch or chuck themselves down a flight of stairs for a few quid, the next generation went on to turn stunt work into a legitimate profession.

Partying and drinking their way through death and tragedy, they created and performed the iconic action sequences of 007, Indiana Jones, Superman, Rambo, Star Wars, Conan, the Alien films and pretty much everything since. They crashed cars, jumped from burning buildings, shot, stabbed, kicked and punched their way into cinema history and all before the arrival of CGI.