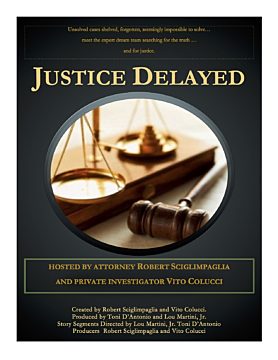 Unsolved cases shelved, forgotten, seemingly impossible to solve. Significant closed cases fascinating in their investigations and outcomes. Meet the expert dream team searching for the truth as they break down these cases and find justice.

Justice Delayed is an unscripted true-crime docu-series that will attempt to reopen and breathe new life into cold cases--notable criminal and civil cases that remain unsolved--in the hopes of getting justice for the victims and their loved ones. The series will also be breaking down elements of closed cases and inviting the audience on a journey of discovery of the process that goes into the investigation and outcome of some infamous closed cases as well.

The investigative team, an experienced attorney and a renowned private investigator, will begin with the perspective of the victim and/or victim’s family. With their cooperation, help of local law enforcement, albeit limited in their scope of capabilities, and reenactments and recreations of crime scenes and civil cases, our PI, his team and the attorney will all work together to potentially help the families finally get justice on behalf of their victimized family members while educating the viewer showcasing the inner workings of the justice system.

The role of PI and attorney will be uniquely pivotal in exposing new information that couldn’t otherwise be obtained by law enforcement alone. The first season will open on the Pellicci Murder case from 1973. This more than 45-year-old cold case is wrought with intrigue, suspense and drama.

Joseph Pellicci, a prominent community man from Stamford. CT, was kidnapped and one month later, his body was found in Westchester County, NY, shot 7 times. The case has gone unsolved due to police corruption, missing evidence and lack of cooperation from both law enforcement jurisdictions. The dramatic turn of events, with the reopening of this case, thanks to the relentless pursuit for justice by our team of investigators and lawyers, has revealed a shocking truth. Joe was separated from his wife as she suffered from a debilitating case of bi-polar disorder gone undiagnosed back in 1973.

In the process of filing for divorce, Joe met another woman, sending his soon to be ex-wife into an uncontrollable rage. Did she then plot, coerce and convince her brother and his friend to do something inconceivable? Kidnap and murder Joe? Now that the Westchester County Police have teamed with the Stamford Police and new evidence has been evaluated, the prime suspect is in their sights. This case is CURRENTLY on its way to being solved.