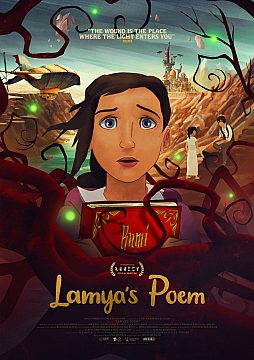 Lamya's Poem is an inspiring and timely tale about a 12-year-old Syrian refugee girl named Lamya. When she flees the violence of her country, she is given a book of poetry of the famous 13th-century Poet, Rumi. As the perils of her journey mount, the book becomes a magical gateway where she meets Rumi when he was a boy and also a refugee fleeing the violence of his time. In a shared dreamworld, they battle the monsters that follow them from their real world situations, and Lamya must help young Rumi find his calling and write the poem that 800 years later will save her life.