Startseite / Filme / Money For Nothing 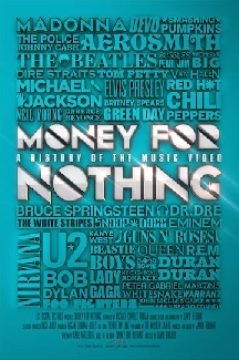 Money for Nothing is a rip-roaring 75 minutes, taking in the past, present, and future of the music video. The Beatles, Elvis Presley, Michael Jackson, Guns N' Roses, 2Pac, Madonna, U2, R.E.M., Nirvana, Jay-Z, Lady Gaga—Money for Nothing is a refresher course in the last sixty years of popular music, and the unforgettable images that accompanied them. It is a story in three parts—the holy trinity of the video. In order to properly draw our map of the terrain, we will perhaps have to retrace our steps a time or two. But what is the music video, at last, but a series of deftly retraced steps—over and over and over again, until we almost forget we have seen it all before?

Let us think of the music video not as an artistic genre in its own right, but as collectively forming the advance party for the most successful advertising campaign ever devised. An ad campaign so brilliant, so slick, and so subtle as to occasionally make its customers forget what they were being sold. This campaign was so triumphant, in fact, that a bit of a refresher course might be necessary. Shall we get started?