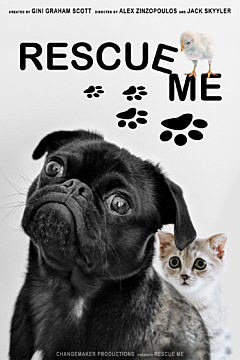 Rescue Me is a documentary about rescue organizations that care for dogs, cats, and birds that have been abandoned or abused and find them forever homes. It also features some owners who are looking to rescue a pet. The film is follow-up to Me, My Dog, and I. It features interviews with owners and volunteers at a dozen rescue and care facilities, and with a few owners of rescue dogs. The film also shows how the animals receive medical treatment, training, and loving care to prepare them to find forever homes, while some are adopted by the owners and volunteers at these facilities. The film additionally discusses the things prospective owners might think about in choosing a rescue pet for themselves and their family. It's a heart-warming, tearful, and sometimes painful look at the sad realities which confront rescue animals. It’s an extraordinary journey through the animal rescue world where we meet heroes both human and animal who are making a difference all around the world every day.

The trailer can be viewed at https://youtu.be/B8AXWOejVEs

Changemakers Productions and Dear Skyyler Productions have now produced 11 films together. The other films include Me, My Dog, and I; Deadly Infidelity; The New Age of Aging; Courage to Continue; Reversal; The Last Party; and Death’s Door. The two companies’ offerings include feature films, documentaries, and TV/film series, using online, retail, and theatrical distribution.