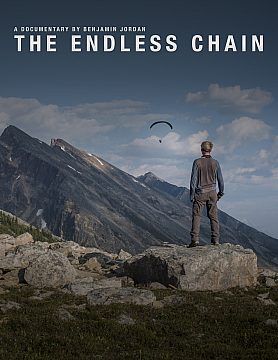 Above and Beyond Documentary Society

Since signing up for a paragliding course 14 years ago, Benjamin Jordan had dreamt of completing an unpowered aerial journey, straight up the spine of the Canadian Rockies. He imagined soaring over glaciers, landing high in the alpine, bathing in turquoise waters, then flying on as he made his way over 1200 km, from Montana to Prince George, BC

But there was a catch. Nobody had ever done it before, and for one, very good, reason.

Join this unprecedented, Aerial and Mountain Adventure as you soar across British Columbia & Alberta's most impressive mountains. And brace yourself for the darkness, as Jordan reveals the inner struggle, mindset and motivation, required to push forward in the face of such risk.