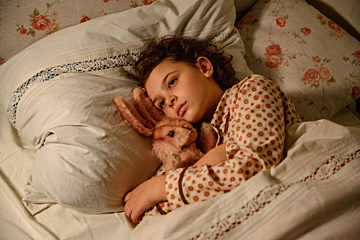 Based on the best-selling novel by Judith Kerr. From the director of the Academy Award winning “Nowhere in Africa”.

1933 – a journey through Europe in search of safety and a new home.

Suppose your country began to change. Suppose that without your noticing it became dangerous for some people to live in your country. Suppose you found, to your complete surprise, that your own father was one of those people. That is what happens to Anna in 1933. Anna is not sure who Hitler is. She is nine years old when everything begins, too busy to take much notice of his face on posters all over Berlin. But when her own father goes missing one day, she comes to realize that the man on the posters is about to change the whole of Europe – starting with her own small life. She is forced to uproot her entire existence. Anna and her family hastily flee Germany, leaving even her favourite stuffed pink rabbit behind. From now on Anna encounters life in exile, not speaking the language, not knowing customs and manners, missing her friends and loved ones. To find a school for Anna is difficult, money is getting very short and they are fearful as they also encounter xenophobia. Yet Anna grows up, finds new friends, and learns to take responsibility. So when her family has to move away yet again, she is certain she can do anything.