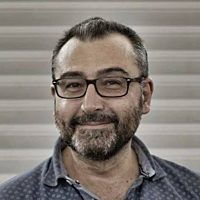 SMOG. AMERICAN DIARY A feature documentary by Gianfranco Giagni / In development
Logline
My father’s diary, Giandomenico Giagni, a screenwriter in Los Angeles looking for places and characters of a film: SMOG.
He will meet the Hollywood myth in an America that was already changing. Following his notes, I retrace that journey

1961. The diary of my father, a screenwriter who searches places and characters for a film in Los Angeles. He will meet the Italians who invent their own destiny immersed in the architecture that already draws the idea of the future.

1962. Smog. The first Italian film shot entirely in America. Its premiere opened the Venice Film Festival and then disappears.
2021. My journey. Rome, Los Angeles. I am looking for the film, I have the diary as a guide. From the Italy of the Dolce Vita, to today’s Los Angeles: the charm of great cinema in the era of handheld computers and those same iconic places at the time of smart cities.