La Página Inicial / Películas / Down Under 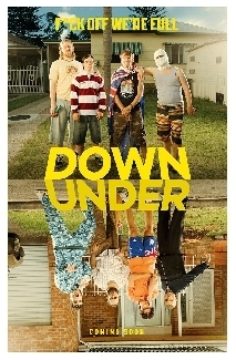 Australia, 2005. A violent, frenzied mob of white men, fuelled by alcohol and grotesque racism, attack anyone of Middle Eastern appearance who dares enter their Sydney suburb.

Two rival gangs patrol the streets, on a collision course, high on the promise of violence:

‘The Skips’, four misfit white Australians: Shit-Stick, a stoner who just wants to teach his Down Syndrome cousin Evan to drive; Jason, pussy-whipped by his pregnant girlfriend and Ditch, obsessed with tattoos of his hero Ned Kelly, Australia’s Robin Hood..

‘The Lebs’, four Arabs intent on fighting their corner: Hassim, just trying to stay on the straight and narrow; Nick, desperate to prove his masculinity; Ibrahim, from the religious old-school and D-Mac, more interested in beatboxing than retribution.

Fumbling, squabbling, inept: these guys need to go home and have a good hard look at themselves. They’re total idiots.

But against-all-the-odds they are sympathetic; scared young men searching for purpose in their lives.

Down Under is unpredictable, shocking and hilarious. A rollercoaster ride through the reality of modern multiculturalism.

A brilliantly real comedy about the times we live in.