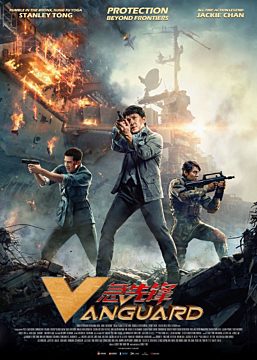 Founded by Tang Huanting (Jackie Chan), the Vanguard agency provides security services to Chinese clients around the world. During the Lunar New Year celebrations, businessman Qin Guoli (Jackson Lou) is kidnapped in London’s Chinatown by Omar, the son of his former boss. Vanguard members Lei Zhenyu (Yang Yang), Zhang Kaixuan (Ai Lun) and Miya (Mu Qimiya) rescue their client, who had unknowingly worked for violent Middle Eastern militants. Tang leads the Vanguard team to Africa to protect Qin’s estranged daughter, the wildlife conservationist Fareeda (Xu Ruohan). During a fierce firefight in forests and river rapids, Fareeda and Lei are captured and held in a heavily-guarded fort. Vanguard rescues them with Zhang almost dying during the retreat in an explosion. In the chaos, Omar has captured Qin and smuggled him to Dubai, the base of his family’s wealth and the location of his militia’s next attack. Omar has secured a weapon of mass destruction to destroy a U.S. aircraft carrier and its naval fleet. To prevent the shock-and-awe attack, Tang and his Vanguard team give chase to Omar’s men and their fleet of golden sports cars through the streets of the desert metropolis.