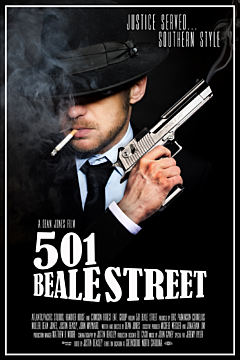 Memphis, Tennessee, home to the famous music district called Beale Street, birthplace of the blues, and rock and roll but also Elvis's hometown and personal sanctuary.

Elvis Presley once roamed the streets of Memphis with his most trusted confidants and body guards known as the "Memphis Mafia". Some of the members sadly have passed away, but the remaining few occasionally make the pilgrimage to Memphis for current celebratory Elvis events to honor their fallen friend for which they always referred to affectionately to as "E".

Every year millions of visitors to Graceland, the final resting-place of Elvis Presley. The Elvis celebrations also attract the many trials and troubles of a saturated tourist destination. Certain crime components lurk in the shadows of an assortment of clubs and music venues but always handled swiftly by the local police. Memphis is not without it's share of intrigue, conspiracy's, and mysteries.

Those remaining of the Elvis body guards the "Memphis Mafia" who were all deputized as sworn Memphis police officers. However after the death of Elvis their lives changed forever. A few of them prevailed in the entertainment business and a few maintained their police connections. Eventually their offspring followed the same path and are now Memphis detectives.

It's 2014 and a new hallucinatory drug has hit the streets wreaking havoc on the city and its inhabitants. Local police and detectives are at a loss as to its source and origin. This spike in violent crimes begin to draw the attention of Elvis's former body guards..the "Memphis Mafia".

These music scene veterans realize the threat goes deeper, more widespread and menacing than anyone had imagined. Banding together they uncover a secret Deep State government conspiracy reaching from the NSA, CIA, and a host of other agencies, following the trail all the way to the highest corridors of power.

These rogue agencies have apparently developed a designer drug aimed at eliminating undesirable social elements. Determining on their own who should be liquidated and or exterminated up to and including the police department, or citizenry that might stand in their way or impede their quest for domination.

Just as Elvis would have done, these men vowed to protect the citizens and the community they so love. Using the combined resources of the younger generation of Memphis detectives and the original Memphis Mafia these men unite in a death struggle to defeat this faceless, unrestrained and sinister government plot.

These outlaw agents hammer our heroes with almost limitless power. The end seems near for the Memphis Mafia whe they are framed for murder and taunted by the gun-wielding agents.

Help arrives at the last moment and it seems as if the agency will have to pay for their crimes after all. In a shocking turn of events the police are forced to release these agents on orders from “above”.

With their hands tied and forced to release the agents it seems as if they have lost the war. Our hero's pay a terrible price in blood and lost companions. The agency is on to the next phase.

But Memphis is their town, their turf and this evil will not go unpunished. Retribution is served up southern style. Along with their tenacity and the "Spirit of Elvis" behind them this rogue government organization is eventually run out of town thus restoring the safety of community and its citizens. Long live Memphis and the King.