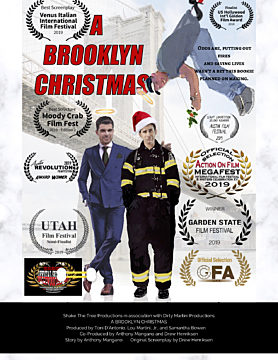 One Christmas Eve in the late seventies, suave wise guy bookie, Tony C., loses his life saving a young boy from being hit by a truck. When he opens his eyes, he finds himself in a waiting room of a dentist’s office. In the heavenly office, we meet Horatio, a bumbling, inexperienced dental hygienist. Nothing is as it seems as we discover this is actually Tony’s judgment moment and the Dentist (St. Peter) and the hygienist (an apprentice angel)are hatching a plan to send Tony and Horatio back down to earth to his old Brooklyn hood to help guide a troubled young fireman. Jerry recently lost his beloved young wife and is struggling through this first holiday season without her. Our would-be angels land at the Brooklyn firehouse and what Tony does not know is that only he can see and hear Horatio, putting him in some awkwardly hilarious situations. Posing as firefighters, albeit completely inexperienced with firefighting, Tony makes a deal with Horatio to put out any fires before they start so his charade is believable and safe. Tony meets Bernie, a single mother and police detective and the perfect match for Jerry. Tony and Horatio plot to bring the two together but complications arise and obstacles cloud Jerry’s judgement. Although Jerry becomes fond of Bernie, the loss of his wife is too much to bear during the holidays. His despair overcomes him and he decides he cannot live with his true love. Tony and his trusty but invisible side-kick Horatio race to Jerry and find him perched on the roof of the neighborhood bakery. As Tony offers council, with Horatio’s comical encouragement, Jerry reveals something that gives Tony pause. Suddenly, Tony realizes that Jerry is the boy whose life he had saved all those years ago. With this revelation, and the love of God and his friends, Jerry realizes that life is worth living. Odds are, putting out fires and saving lives wasn’t a bet this bookie planned on making. But for A Brooklyn Christmas, it’s a win, win.