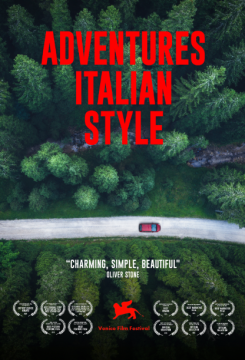 Oliver Stone calls it: “ Charming, simple, beautiful". .Step back in time, before the fall of the Berlin Wall, with three young Italian men on the road-trip of a lifetime. Pago, Rice and Bibi leave their quiet hometown looking for adventure on a ten-day vacation in Soviet controlled Eastern Europe. On their way, they meet Emil, an exiled Romanian who has escaped the regime of his dictatorial homeland. Emil asks the guys for a suspicious favor, deliver a suitcase to his wife and daughter in Bucharest. Out of pity and looking for a thrill, the three friends hit the road on a journey beyond their imagination. They find themselves involved in surreal situations, evading secret police and surrounded by dangerous characters who put their lives at risk. Among the many thrilling plot twists, the three adventurers come to understand the true worth of the ordinary possessions we take for granted. They make personal discoveries, cement their bonds of friendship, and together attempt the most important and terrifying mission of their lives.