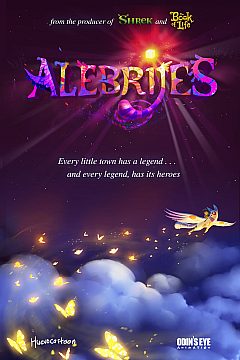 Pedro, a courageous orphan pure of heart, is desperate to escape his wretched orphanage and its cruel custodian Vasco. One evening, after being punished by Vasco for not earning enough money, Pedro cries his heart out, sending a silent prayer into the universe. To his great surprise his plea is answered in the form of a mysterious box. Thought to be lost forever, this box contains a link to the mythical chimeric creatures called THE ALEBRIJES. Legend has it that for every person in the world there is an Alebrije that is a reflection of who they are - the pure of heart and the wicked alike have an Alebrijes to match.

Pedro's Alebrije, named Puko, erupts with life in the human world, flying around with Pedro and causing mischief with its magical powers of invisibility. Pedro and the fantastical creature have enormous fun to the delight of his quirky orphan friends Ana, Thomas and Sara. Together the children hatch a plan to escape using Puko so they can begin a search to find caring families. However, the odious Vasco has other plans. Learning of the existence of the magical box, Vasco sends his goons to capture the children. His dastardly plan succeeds and Vasco takes possession of Pedro’s box, summoning cruel and terrible Alebrijes to enact his revenge on the town that has shunned him.

Pedro and his friends must overcome internal squabbles and become heroes to fight against Vasco’s control, save their precious hometown and protect the Alebrijes from certain destruction. Banding together, each child summons their respective Alebrije and will thwart Vasco and his goons with their courage, intelligence, and heart. Together they not only save the day but discover the family they always wanted had been one another all along.