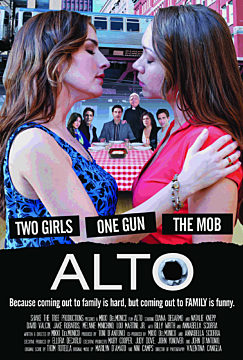 Improbable love, the mob, and family traditions gone awry pave the way for comedy in this character-rich story that ventures into uncharted territory, proving the most surprising discoveries often come when we least expect it, in the midst of murder plots, federal investigations, and oh yeah, lasagna.

Francesca “Frankie” Del Vecchio is headstrong and passionate about two things: her band and good old fashioned Italian-American culture...and by this, we are talking about anything NOT related to the Mob. Still living at home with her mother and sister, engaged to the RIGHT boy from a good Italian family, Frankie’s life seems to be going down a very traditional path...until she discovers a dead body in the trunk of a rental car, messing up a perfectly good New Jersey gig. Her sister, Heather, who can’t get enough of anything Mafia — including being obsessed with the cult phenomenon TV show MOB HIT — sees an open door, and she's determined to go through it...right to the funeral.

At the wake, Frankie and Heather meet two people for whom the Mafia isn't a television show. Nicolette Bellafusco manages wedding bands and also happens to be the sophisticated daughter of Caesar “The General” Bellafusco, a newly crowned Brooklyn don. Heather is captivated by Ceasar, Nicolette is captivated by Frankie, and Frankie can’t wait to get the hell away from it all. That, however, is easier said than done. Not only are the Feds swiftly on Frankie, questioning her about her new Mafia friends, but Nicolette shows up at the band’s next gig – triggering something in Frankie she never would have imagined.

As Frankie finds herself alienated from her fiancé and – ambivalently – growing closer to Nicolette, she manages to cast herself as a featured player in a full-scale conspiracy against Bellafusco, wherein only she can prove who is really out to get him. Unexpectedly paralleling the very stories she detests on MOB HIT, caught between her planned marriage to Tony and her growing attraction to Nicolette, Frankie is finding out that the most surprising discoveries often come when we least expect it, in the midst of murder plots, federal investigations, and oh yeah, lasagna.

When unlikely worlds collide, it all comes down to...Two Girls. One Gun. The Mob. Because coming out to family is hard ... but coming out to FAMILY ... is funny.

** Under Contract - Distribution Team-Jesse Baritz with Multicom Entertainment Group (US)