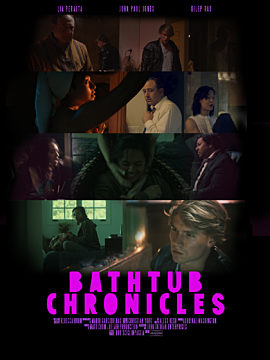 Bathtub Chronicles is the story of Robby, a girl coming out of a mental hospital after being raped from a past boyfriend. Robby decides to use her parent's master bathtub as the place she will take a sabbatical and work through her residual pain. The story shows the redemptive reconnection between the girl and her mom and dad as well as her current boyfriend.

Robby is discharged from the mental hospital after her breakdown. When her mom, Karen, picks her up to bring her back to her family home, Robby knows it's going to be difficult because she knows her internal work isn’t over yet. When her parents are gone, Robby converts her parent's master bathtub into the sacred sanctuary in which she will work through all the feelings coming up from the trauma she faced. Is Robby crazy? What is going on with this girl? Then her therapist sits with her, we realize Robby was raped in a past relationship and she's never emotionally healed from the experience. Even though her current boyfriend is supportive, he is oblivious to why Robby won’t have sex with him and tries in vain to emotionally connect with her. Robby's dad, Greg comes home to his daughter’s sprawl of taped-up articles and the den she made around his bathtub. He feels helpless and leaves Karen to deal with their daughter’s

me\tdown. Karen is determined not to let her daughter’s state upset their daily lives and instructs Greg to continue living their lives. Robby continues down the rabbit hole of spiritual healing, which spins everyone in her life into a spiral. They all are left to face their insecurities. As messy as things get between Robby, her parents, and her boyfriend, they each find a way through the turmoil of being honest and vulnerable with themselves and each other. In the end, Robby steps out of the bathtub. a new woman. She and her dad have a newfound relationship she's always longed for. Robby and Karen are starting over with less judgment passed between each other. And Robby and her boyfriend have a deeper connection after going through the bathtub chronicles.