Home / Films / Behind the Line 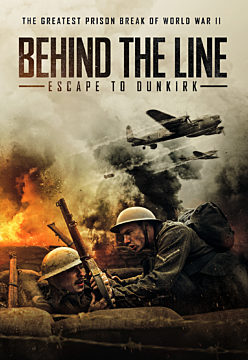 940 Belgium, the Ardennes Forest. Danny, his friend Bill & their squad are captured, by SS troopers, whilst trying to aid the allies retreat to Dunkirk.

Told they were being escorted to a camp they are instead taken into the forest lined up in a ditch and shot. Danny and Bill survive hiding under the dead bodies of their squad members. The SS unit pursue them throughout the forest.

Just as they feel they have nearly escaped they are caught once again & taken to holding camp, named Stalag III, by the commander in charge Schmit, after a much larger camp he used to run, deep within the German countryside, where he longs to return.

Schmit, a fan of boxing, notices Danny’s ability whilst fighting in the courtyard & forces him into an organized fight. Despite being told to throw the fight Danny wins it. As punishment Schmit arranges a second fight against his own Champion, The Black Hun, who has never been defeated. The other prisoners see this as an opportunity to organize an audacious escape attempt before they all get transferred to camps deep within German territory.

The plan is for Danny to hold out as long as he can, in order to get as many prisoners out of the camp as possible. Schmit and some of his guards are suspicious of the POW’s but desperately want the fight to happen, to prove how superior they are to the allied fighters.

Can Danny stand up against the Black Hun and will the escape work or will the POW’s plan be discovered and their hopes of escape ended for good.