Home / Films / Bullets From Beyond 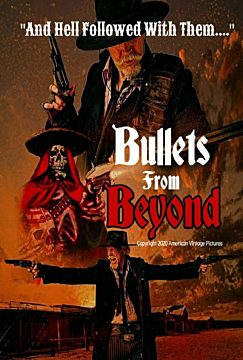 1873: Paroled from prison to bring 12 men to justice, Tony Monaco brings in his last man- a mysterious stranger with a bizarre artifact: an Aztec skull. Tony is warned that supernatural powers within the skull will attract the Specters of the Skull, deadly ghost riders from the beyond.

Now in possession of the skull, Tony encounters Domino, a beguiling fortune teller who gives him a supply of magical black bullets that will protect him from the other-worldly forces that pursue him. Domino tells him the skull must be returned to a lost temple in the mystical land of Aztlan. Tony refuses until Domino reveals the temple also holds a vast treasure.

Together, Tony and Domino recruit a band of outlaw Comancheros, a bounty hunter, and a Ute renegade who knows the location of the temple and the legend of its treasure. Pursued by the specters and their corrupted human minions, Tony is running out of black bullets and surrounded by the greed and dark motives in the hearts of the those who have joined him on his quest.