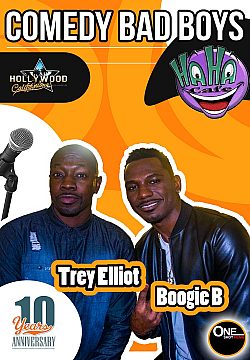 Trey Elliot, Boogie B Montrel, Chiko Will Chiko Will

On November 7, 2019, the Comedy BAD BOYS- Comedian Boogie B Montrell and Comedian Trey Elliot play the Ha Ha Comedy Club of Hollywood, California. Curtis Elerson captures the Comedy Bad Boys performances by Hurricane Katrina refugee Boogie B Montrell, known as the New Orleans representative - mouth of the South, and King of The "Let Me Stress You Out" videos, along with New Jersey native Reckless and Ill-Advised Trey Elliot, as they take you on a journey from pillar to post, and car to couch surviving relationships, homelessness and the road to their success in Hollywood.