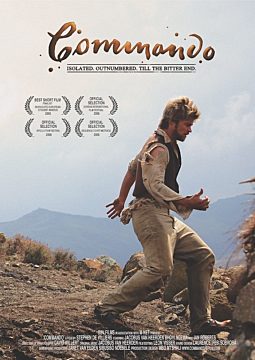 Commando is an epic tale of adventure and survival set during the Anglo-Boer War. It’s an adaption of the iconic journal by the same name, left to us by Deneys Reitz - the son of the President of the Orange Free State. He was 17 when he began fighting in the war and he went on to live and record what has been called “the greatest true story of war and adventure ever told”.

The film is set during the last stages of the war, during a time when the Boer people were imprisioned in concentration camps, with the women and children dying in their thousands (a third of the Boer population died due to their unjust imprisonment). Following a sharp skirmish, cut off from his commando and
surrounded by the enemy, Reitz finds himself alone and adrift.

Around him, the nefarious British “scorched-earth policy” has devastated the two British occupied Boer Republics. He soon falls in with a rag-tag, colourful group of Boers, made up of local patriots (‘bitter enders’) and internaitonal soldiers of fortune. Likewise cut off, with few other options, they set off on
an epic odyssey, deep into enemy territory, in a bold attempt to help turn the tide of a seemingly unwinnable war.

To survive, they draw on every ounce of strength, stamina and dogged tenacity, as they play a deadly game of cat and mouse, hounded by the British division sent to intercept and capture them, all the while beset on by the harshness of the elements.

Against a beautiful, yet bloody backdrop Commando, at its simplest level, is a gripping adventure-survival tale. The film contrasts pounding chase sequences and explosive battles with moments of compassion and philosophical introspection.

In doing so, it draws on the truth of lived history as it explores how survival is made possible by the bonds of fraternity, and what it means to risk all in the quest for freedom, justice and self-determination.