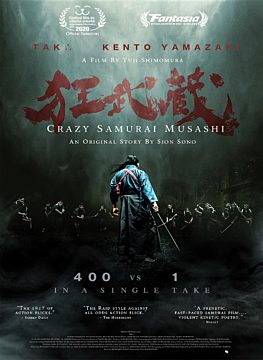 In 1604, Miyamoto Musashi attacked the Yoshioka family at their dojo and defeated master Seijuro and his younger brother Denshichiro in two duels. To save their reputation, the Yoshioka family decides to fight back with all 100 family members and hire an additional 300 samurai. Now Musashi sets out to defeat all 400 enemies in his most famous battle.

The most stunning 77-minute one-scene-no-cut action sequence ever put on film follows, as Musashi goes on a rampage of carnage, defeating one samurai after another. Leading Japanese action-star, fight choreographer, and stuntman Tak Sakaguchi takes over the role of the legendary samurai Musashi, previously played by Toshiro Mifune in the Samurai Trilogy, and gives a transcendent no-holds barred performance. Celebrated director-writer Sion Sono (Forest of Love, Love Exposure) came up with the concept to what is sure to be a new classic in the samurai cannon of films.