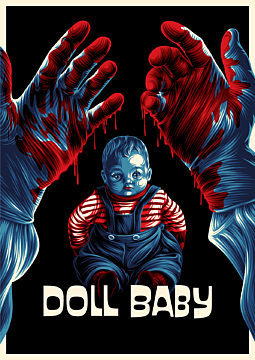 LOGLINE: An alcoholic cardiologist and his surgical team are hunted over the course of one night when a sinister baby doll appears at the hospital.

DOLL BABY is a giallo-style thriller, with striking visuals, stylized violence, and an awesome musical score. Set in the dead of winter at one spooky location, an atmosphere of dread hangs over the proceedings as a well-developed cast of characters fight for their lives. Secrets will come to light. Blood will flow. Terror will reign.

A cardiac monitor flatlines as a heartbeat slows to zero. The operating surgeon — DR. HAROLD LOMBARD (58) — calmly opens the heart of the patient he’s just flatlined, inserting an artificial heart valve. He dictates to his intern DR. KALANI (32) and scrub nurses MARION (47) and ANGELA (28), describing what he’s doing as he works. Finishing up, he tells his anesthesiologist — DR. GRIMM (50) — to restart the heart. They begin to sew up the patient.

Just at sunset, a sinister black car pulls into the hospital parking garage. A dark figure in an overcoat and black gloves — THE KILLER — exits the car, taking along a vintage baby carriage loaded with weapons and other items.

The Killer rounds the back of the hospital, where a NURSE is taking a smoke break. The Killer stabs the nurse, hides the body in a dumpster, and uses the Nurse’s KEY CARD to enter the building.

Dr. Lombard returns from surgery to find a package on his desk — a white rectangular box with a red ribbon and bow. He opens it to find a creepy BABY DOLL inside, along with a heart-shaped card that reads: “Let’s talk.

Lombard thinks it’s one of Dr. Grimm’s pranks. He phones him, but Grimm knows nothing about it. Lombard hangs up and pours some scotch from a bottle in his desk. He says out loud: “Okay. What do you want?” The Killer speaks in an angry whisper via the doll, which has been rigged for sound. “Do you know what today is?”

The Killer informs Dr. Lombard that it’s been exactly one year since he performed open heart surgery on an infant named Timmy. It should have been a simple procedure to close a hole in the boy’s heart, but Lombard was drinking that day and botched the surgery. The child died on the table. Now the Killer — Timmy’s mother — has come for revenge.

The Killer tells Dr. Lombard that if he calls for help, he dies. If he leaves his office, he dies. The doll is equipped with a video camera so the Killer can monitor Lombard remotely. If he tries anything sneaky, the doll will release a deadly gas and send him into cardiac arrest, killing him. Dr. Lombard reluctantly plays along, trying to find a way to save himself.

Meanwhile, the Killer stalks the hospital, taking out each member of the surgical team in cardiac-related ways — a knife to the heart, drug-induced heart attack, electrocution…

The juiciest death of all is saved for Lombard. The Killer plans to rip his heart out of his chest, “Just like you did to me when you killed my boy.” In a twist, the Killer reveals that she has Lombard’s daughter VALERIE (21) in the trunk of her car, which has been rigged to explode. Now the doctor must decide whether to let his daughter die and save himself, or to sacrifice his own life for hers…

Is the Killer really who she seems to be, or is someone else pulling the strings?

DR. HAROLD LOMBARD, 58. A once-brilliant cardiac surgeon going through a mid-life crisis. He’s charming and charismatic, but his drinking and womanizing are starting to wear thin. He’s made some enemies. He’ll face his biggest trial when a dark secret from his past comes back to haunt him. Prototype Cast: Harrison Ford, Samuel L. Jackson.

THE KILLER, 30. A grieving mother whose sorrow has turned to murderous rage. Knows revenge is a dish best served cold and can be icy and calculating when she needs to be. Schizophrenic. Speaks in an eerie whisper that sends chills up the spine. Leads Dr. Lombard into a macabre cat-and-mouse game. Prototype Cast: Margot Robbie, Saoirse Ronan.

TIMMY, THE DOLL. An angelic, porcelain-faced doll with cracked paint and creepy glass eyes. Modified to record video and deploy deadly surprises. Voiced by The Killer, Timmy seemingly takes on his own personality, as if possessed.

DR. ZARA KALANI, 32. A cardiology intern in the early days of her medical career. Brainy, beautiful, and driven, she’s carrying on a secret affair with Dr. Lombard while helping hide a secret that would end both their careers. Resents Lombard for having put her in such a compromising position. Prototype Cast: Melanie Chandra, Freida Pinto.

MARION, 47. Dr. Lombard’s right-hand Nurse and former flame. Their love affair long over, Marion is Lombard’s closest confidant and sees herself as his “work wife”. A jaded veteran of the medical world, she dispenses sarcastic wisdom. Loyal to a fault, she “knows where the bodies are buried”. Prototype Cast: Rose McGowan, Laura Dern.

ANGELA, 28. A newer addition to Dr. Lombard’s surgical team, Angela is a sexy young thing and a hard worker. She has a rivalry with Marion. Angela’s also sleeping with Dr. Lombard, which she takes far more seriously than he does. Is she a sweet girl headed for heartbreak, or does she harbor a darker side? Prototype Cast: Zoe Kravitz, Abigail Cowen.

VALERIE, 21. Dr. Lombard’s daughter and only child. A bright college student with an independent spirit. Studying to become a speech therapist. Kidnapped and used as a hostage against her father. May be involved to a greater degree than she first appears. Prototype Cast: Ellie Bamber, Chloe Moretz.