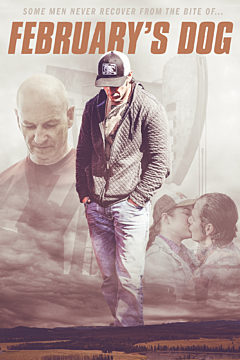 FEBRUARY’S DOG takes place in modern time and follows two uniquely different, yet typical men. Dale Walters is a very charismatic and lighthearted man that works hard to enjoy a life of adventure and excitement. Nigel Loggins is a military veteran that is quiet and calculated in his approach towards life. The film opens with these two men as they are finishing up work. They get called into the office at the end of the day and are laid off by their boss but are told confidently that this is just temporary, and that they will be back at work in three months.

Dale and his wife Emily Walters live out in the country on a beautiful property. Emily is the brains of the family and takes great joy in caring for her man-child Dale when she is not playfully sparring with him with her comically sharp wit. They have worked hard and played hard in the past to achieve and maintain the lifestyle of their dreams complete with trips and toys. Emily really wants to have the Walters first child and Dale is struggling with continued joblessness and a lack of maturity. Dale continues to fill his days drinking and distracting himself while Emily continues to work long days at the hospital as a nurse.

Nigel meets a contractor named Jedd Wilson who hires him for some casual construction work. Jedd is a very quiet man and does not expose his troubles to many. Nigel is offered a very rare insight into Jedd’s life which causes some alarm. Nigel’s employment with Jedd is suddenly halted when Jedd goes missing and an offhand comment causes unbearable regret.

Dale and Emily’s lifestyle is burning through what money they had put aside. Dale is sinking quickly into a very moody depression while Emily scrambles to adjust to Dale’s volatile new temperament. She struggles with the challenge of keeping herself, the property, and Dale together until better days return. Nigel and Dale make regular calls to their old boss Arthur to see if they can be rehired. There are no other jobs to be had, bills are piling up, the stress is escalating, and all hope of life as it was is vanishing. Both men find themselves in a merciless battle against desperation and depression.