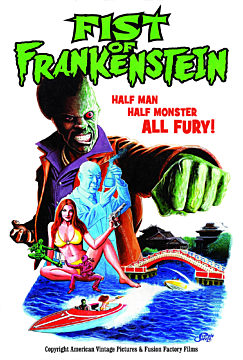 Vietnam, 1972, Sgt KT Streeter is nearly killed while smuggling Opium out of Vietnam. Body ravaged from war and barely clinging to life, he becomes the first test subject for a secret formula used to regenerate limbs and organs. The formula works and Streeter’s life-force is returned… along with a super powered body.

Streeter is recruited into the newly formed D.E.E.P Force (Drug Enforcement and Espionage Police Force) and his first assignment takes him to Las Vegas. Streeter encounters an old military buddy, Jacki Scarpetto, who is connected to the mafia in Vegas and can lead him to his target, the international drug lord Carter Conrad, aka, "King Con".

Together, Streeter and Scarpetto set out to connect with King Con, but Streeter starts rejecting the formula and his body is deteriorating by the hour. Now with limited time, Streeter must stay alive long enough to complete his mission.

Director Mike Olafson of American Vintage Pictures (Hot Lead, Hard Fury) and Producer Mark Steven Grove of Fusion Factory Films (Stra Raiders, Gathering of Heroes, Aliens & Dragons) have teamed up to produce various films with a style and feel similar to B-Movies, Drive-in Films, and grindhouse/cult classics from the sixties and seventies. Fist of Frankenstein is the first of these films and it will punch its way out of a 70's era Kung Fu comic book! Shooting begins fall 2021!