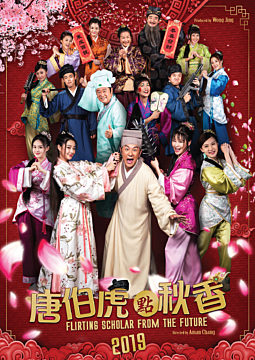 Flirting Scholar from the Future

Tiger Wong (Benny Chan), Lambert Ho (Dominic Ho) and Skinny Pig (Lam Tze Chung) are childhood buddies. They grew up watching the movie “Flirting Scholar”. They are massive fans of the movie and are familiar with every line of the script. When they grow up, Tiger becomes a police detective, Lambert a valet and Skinny Pig, an obscure inventor.

One day, Skinny Pig puts together a “movie time machine” and accidentally sucks Tiger, Lambert and himself into the dimension of “Flirting Scholar”. They encounter Tang Bo-hu’s best friend, Zhu Zhi-shan (Natalis Chan) at Tang’s house. By watching a yoga video with sexy girls on Skinny Pig’s smartphone, Zhu is convinced that these men are from the future, and is ready to tell them everything he knows. He tells them that Tang has fled the city with his mother to elude Emperor Ning’s blood brother oath. Meaning Tang is never a slave in Wah Mansion, nor does he know Autumn the maid. The story of Tang flirting with Autumn never happened at all. These facts lead to the Butterfly Effect, rendering the story in “Flirting Scholar” totally changed. Tiger comes up with the idea of heading over to Wah Mansion to meet Autumn in place of Tang.

After all kinds of hardships, the four finally arrive at Wah Mansion as servants. They find that Shi-liu (Kingdom Yuen) has a sister. Shi-liu herself is feisty and ugly; whereas her sister Petite Shi-liu (Sabrina Qiu) is beautiful, yet just as feisty as her sister. Despite this, the four discover that there are only seven housemaids in Wah Mansion, yet none of them is Autumn; and the Crown Prince Ning is forcing Madam Wah’s (Cheng Pei-pei) only daughter Qiu (Fiona Zhen) to marry him.

Will the four finally save the day for the Wahs? Will Tiger be able to meet Autumn? Can they return to the present times?