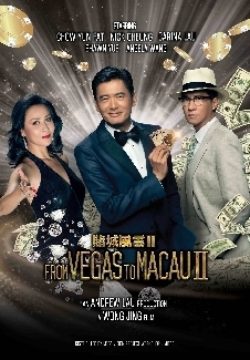 From Vegas To Macau II

After foiling the criminal plans of the international money-laundering syndicate DOA, our hero from Macau, Ken (CHOW Yun Fat) is ready to sit back and enjoy life. Ken’s plan for a calm existence comes to a halt when his protégé, Vincent (Shawn YUE) joins Interpol and asks for his master’s help in arresting the real mastermind of DOA, Ms. Aoi. Though initially refusing to help, Ken eventually decides to work with Interpol again, as he is nearly killed by Aoi in retaliation for the destructive act he did to DOA.

Mark (Nick CHEUNG), the Chief Accountant of DOA and a highly intelligent guy, betrays Aoi. He steals the dirty money amounting to USD15 billion from DOA via the internet and flees to Thailand with his daughter Yan (Angela Wang). Aoi sends numerous hit men to hunt him down. Ken and the Interpol are also after him as he will be a material witness against DOA.

In Thailand, Ken and Vincent get into a fierce wit and fist game with the hit men to save Mark. The sly Mark slips through Ken’s hands several times before he is finally captured. Mark eventually allies himself with Ken to work against Aoi. However, new complications arise when the love of Ken’s life, Molly (Carina LAU) appears to be in league with his enemies…

It all comes together in an ultimate battle of life and death at an altitude of 30,000 feet in “The Dragon’s Palace”, the sky castle of DOA. This will be one of the biggest gambles in Ken’s life. Who will emerge as the ultimate winner?