Home / Films / Her Name Is Carla 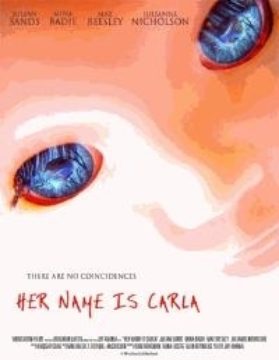 Her Name Is Carla

A very adult psychological mystery. Carla is desperate to have a child, but her husband Bill is infertile. When she meets a mysterious couple, who are visiting from New York, Carla is instantly attracted to Jack, and invites him and his wife to stay with her and Bill for the evening. Bill is suspicious of the couple, but his judgment is obscured by his attraction to the enigmatic Molly. Molly teases and leads him on while insisting that they have met before. Meanwhile, the sexual chemistry between jack and Carla is electric. Their flirtation leads to a drunken midnight stroll and passionate lovemaking in the woods. When they return to the house it becomes clear that Molly and Jack's arrival may not b a coincidence as their attitude becomes more threatening. Molly tells Bill a strange and erotic tale written by her 10 year-old daughter, whose name is also Carla. Bill becomes frustrated and alarmed, and insists that this taunting, perverse couple leave their house.
After Bill and Carla have gone to sleep, the visitors will return, leading to an act of brutal violence and heartbreak. Is this a story of a mother's revenge or the prophecy of an unborn child?