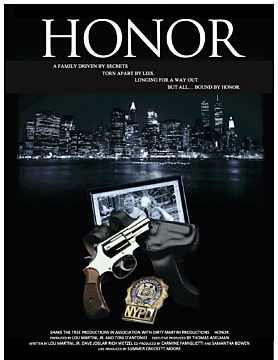 NYC 1988, a city in turmoil, was filled with crime and grime, eating at the city's very core. The Nascondare family, built on honor, has become a web of secrets threatening to shake this proud family of NYC’s finest men in blue. Jack Nascondare is a retired detective, father of two active detectives and the owner of Jack’s Hideaway Bar. His family is on the brink of self-destruction Two different brothers, Johnny Nascondare a hot-headed, drug-addicted, prone to violence, cop on the edge and Tommy, a hero, a role model, a pillar of the community, but with a secret that could rock the family and his career. As lives begin to unravel and more certainties become impossible to control, the very fabric of this family is tested. And as it becomes clear that Jack has a deep dark secret from his past as well. It is this father’s love and commitment to his boys that has caused the dysfunction that has spiraled them all out of control until an unlikely hero brings back HONOR to this tumultuous family of NYC detectives.

This gritty New York drama set in the ’80s explores the relationships between fathers and sons, fathers and daughters and brothers at odds while examining the underbelly of a city in chaos. Dysfunction, lies and secrets threaten to rip a family apart in this action-filled cop drama that begs the question...how far will you go to honor your family? When a family is surrounded by corruption and deception, it’s anybody’s guess where the truth will lie and who will pay the ultimate price by sacrificing it all to find honor in the end. Shot and told in the style and vein of Dog Day Afternoon, The French Connection and Midnight Cowboy, this edgy, uncompromising tale of a family torn apart will leave you breathless.