Home / Films / LIFE AS A B MOVIE: PIERO VIVARELLI 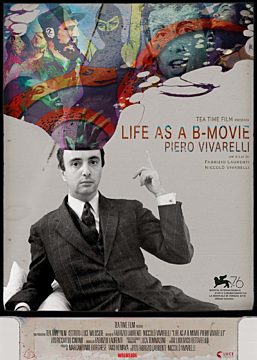 LIFE AS A B MOVIE: PIERO VIVARELLI

The unbridled life and kaleidoscopic filmography of Piero Vivarelli, who made Italian B-movies of all genres, wrote hit rock songs and penned the screenplay for Sergio Corbucci's Western "Django," adored by Quentin Tarantino, are intertwined in a portrait of an unsung postwar pop culture maverick, provocateur and revolutionary (the only non-Cuban besides Che Guevara to be given a Cuban Communist Party card signed by Fidel Castro). The creative doc is also a prism into an unexplored “secret” history of Italian B-movies cinema encapsulated in the doc as the “left sidewalk of the Via Veneto” which is “where the leftists and the hookers hung out.” It explores a cinematic world with analogies to Roger Corman’s alternative productions but at the same time delves into the particular energy that prompted Tarantino’s passion for the Italian B-movie masters. Vivarelli’s musical movies featured Italian rocker Adriano Celentano and sublime singer Mina alongside Chet Baker during his drugged-out Italian interlude. His erotic/exotic cult title "The Snake God" (1970) was in the Kings of the Italian B-’s retrospective at Venice, godfathered by Tarantino in 2004. “Snake God” is the first work within a trilogy also comprising “Black Decameron,” shot in Senegal and featuring an acting turn by late great Senegalese cinema pioneer Djibril Diop Mambéty, and “Codice D’Amore Orientale,” based on the Kama Sutra and shot in Thailand.

As a music journalist Vivarelli is considered key to bringing rock'n'roll to Italy and organized the first Italian Led Zeppelin concert. His seminal 24 mila baci, (24,000 Kisses) rock ballad performed by Celentano went around the world, covered in France by Johnny Halliday, and was subsequently used by Emir Kusturica (who is in the doc) in his first film "Do You Remember Dolly Bell?," and more recently homaged by Pavel Pawlikoski in "Ida." The doc’s narrative interweaves accounts — some by him — of different phases of Vivarelli’s life with his movies, becoming an examination of how Vivarelli’s life and work reflect each other in strange and surprising ways. Though entertaining throughout, it delves quite deep into his dark personal side, in particular his failure as a father. Besides many interviews, “Life As a B-Movie” also features a wealth of archive materials, photos, rare recordings, and super 8s of Corbucci and Piero. Talking heads besides Kusturica include “Django” star Franco Nero and French critic Oliver Pere, comments from Tarantino, and many prominent Italian personalities including cult director Umberto Lenzi (‘Cannibal Ferox’) and Oscar-winner Gabriele Salvatores (‘Mediterraneo’).