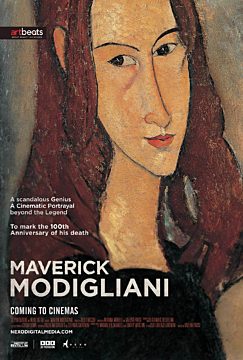 ‘Artiste maudit’, scandalous genius and indisputable master of 20th Century Art: a portrayal that goes beyond the legendary to celebrate the 100th Anniversary since his death.

Narrated here from the original point of view of his young wife, Jeanne Hébuterne who committed suicide two days after his death. Jeanne together with the Russian aspiring poetess Anna Achmatova, and the English journalist Beatrice Hastings were the women he painted portraits of, and whose faces, almost caryatid-like, became the very icons of his art. The action of the film unwinds through museum halls, enriched by the works of the Albertina in Vienna and the splendid exhibition dedicated to the artist at Livorno’s City Museum, as well as the National Gallery of Art in Washington and the great museums and art collections in Paris. Interviews with: Marc Restellini, Paolo Virzì, Simone Lenzi, Gérard Netter, Antonio Marras, Laura Dinelli, as well as Emilia Philippot, Jacqueline Munck and Klaus Albrecht Schröder.

Directed by Valeria Parisi (The Prado Museum. A Collection of Wonders)