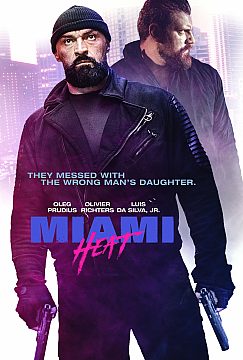 Yuri (Oleg Prudius), a former Sambo champion and ex-Russian special agent, is now settled down and living a normal life as a mechanic in Miami, dedicated to raising his teenage daughter, Julia. When his daughter goes missing after an appointment with a top modeling agency, Yuri suspects that she may have been kidnapped...
The authorities are not willing to act on the case right away, and think she is likely just a teenager having fun, but Yuri knows that his daughter would not just disappear and that if something has happened to her, time is of the essence. Yuri is reluctantly forced into using the skills from his old life to track down and find his missing daughter.
Yuri immediately goes on the offensive, tracking her movements to an exclusive nightclub where he learns that Julia has just become the latest catch for a human trafficking conglomerate. A violent battle ensues in which Yuri leaves several bodies in his path but ultimately ends up being captured and then dumped into the Ocean, left for dead.
Yuri barely survives but must push on so he seeks help from old friend, a hacker named Luis (Luis da Silva Jr), and his ex-wife Max (Shannon Murray), who also has a certain set of special skills herself. They work their way through this sinister business empire, finding clues that lead them ever closer to Julia who is being held by the top boss- Charles (Oscar Corbella) and his right hand man- Olivier (Olivier Richters).
Charles, however, seems to always be one step ahead of Yuri as he narrowly escapes each time that Yuri thinks he has him cornered… Can Yuri overcome the odds and rescue his daughter?