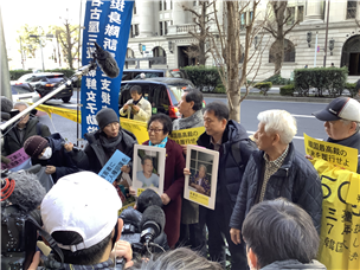 The Empire of Japan, which started the Pacific War, ruthlessly exploited Korea as its colony and forcefully recruited young girls aged 12 ~ 15 to serve war-criminal companies under the “Korean Women's Volunteer Labor Corps.” In 1988, the story was disclosed to the world for the first time. The film tells the story about conscientious people in Japan who organized a group supporting lawsuits for Korean comfort women for Nagoya Mitsubishi against the Japanese government to help the young girls who are now elderly.

Director Rim Yong-chul focused on the activities of “Nagoya Mitsubishi Korean Comfort Women,” which has been active for over 30 years in pursuit of the truth behind the labor corps. Their activities, unchanged for 30 years, moved to Korea to help create civilian groups to help former comfort women. Finally, their effort bore fruit, with them winning the lawsuit at the Korean Supreme Court in 2019. Through his film, director Rim wanted to tell the story of over 1,000 members who loved peace more than anyone and “foolishly” walked only one path, rewriting the history of human rights and justice.