Home / Films / Once Upon a Time in Hong Kong 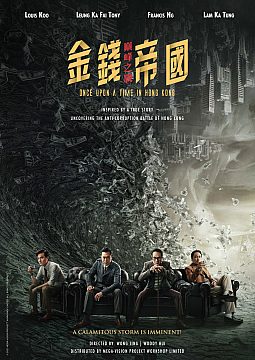 Once Upon a Time in Hong Kong

In the early 70s, when Hong Kong was under British colonial rule, corruption was as rampant as ever. The majority of the Hong Kong Police Force collaborated with the triads. As king of the corruption empire, Chinese detective sergeant Lak Chui (Francis Ng) colluded with Cripple Ho (Leung Ka Fai Tony), lord of the underworld, and made almost ten billion dollars through bribery in ten years' time.

Lawyer Hank Chan (Louis Koo) despised this kind of illegal acceptance of benefits. He believed this would deprive the general public of their opportunity to fight for their own rights if they could not afford black money. His luck came when Hank met Nash Pak (Lam Ka Tung), his old friend who came back from England. Nash admired Hank’s integrity, and hence invited him to join the Independent Commission Against Corruption (ICAC), an anti-corruption organization directly accountable to the Governor of Hong Kong.

Hank and Nash selected a team of elites, forming the first team of ICAC investigators, and cracked down hard on the underground laws of Hong Kong. Their first target was Lak Chui and Cripple Ho. After tremendous efforts, initial results were seen. But what followed was a series of counter-attack by Lak Chui and Cripple Ho. The team members of the Commission were being threatened and persecuted. However, Hank's confidence did not falter at these setbacks. He was even more determined to remove these two tigers from the scene. The fight between the righteous and the evil had begun.