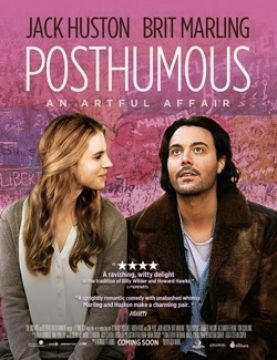 Set against the vibrant art mecca of modern Berlin, Posthumous is a love story between Liam Price (Jack Huston), a struggling artist whose artwork skyrockets in value when he is mistakenly thought to have died, and McKenzie Grain (Brit Marling), the reporter that tries to expose him for the fraud.

Complications ensue when Liam, unable to resist basking in the glory of his success, shows up at the opening night of his own retrospective. When Liam meets McKenzie, he is instantly drawn to her zestful determination and lies about his identity, pretending to be his own brother. Smart and resourceful, McKenzie quickly discovers Liam's real identity and secretly resolves to expose his hoax on the art world. Despite the obvious lie that both Liam and McKenzie perpetuate, they've never been more honest in their lives than with each other. Faced with their undeniable connection, Liam and McKenzie are forced to reevaluate the real lies in their own lives and what they really want for themselves.