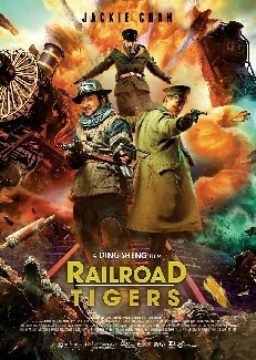 Shandong Province's railway network is a crucial transportation link for the Japanese army in 1940s China. But a small group of guerrilla fighters - nicknamed the Railroad Tigers - are humiliating the Japanese by stealing their supplies from under them. Their members are lowly railway workers - familiar with trains and the local geography - who work at Zaozhuang Train Station. Led by head porter Ma Yuan (Jackie Chan), their members include fellow porters Dakui (Sang Ping) and Xiaohu (Alan Ng), tailor Dahai (Huang Zitao). When injured Eighth Route Army soldier Daguo (Darren Wang) arrives in town, they hide him from the Japanese. He tells them of his squad's failed plan to blow up Hanzhuang Bridge, so as to cut off the distribution of Japanese army supplies across China. Daguo entrusts the crucial mission to the Railroad Tigers, even if it will mean sacrificing their own lives. But in their first attempt to steal explosives, Ma Yuan is captured by senior Japanese military police officers Ken Yamaguchi (Hiroyuki Ikeuchi) and Yuko Nakashima (Zhang Lanxin). When all seems lost, they are unexpectedly rescued by pancake vendor Auntie Qin (Xu Fan) and noodle vendor Fan Chuan (Wang Kai). Fan Chuan, a former bodyguard to a warlord and a skilled sharpshooter, agrees to join the Railroad Tigers, teaching them the military tactics that will give them the slightest chance of blowing up the bridge to interrupt the Japanese war machine……