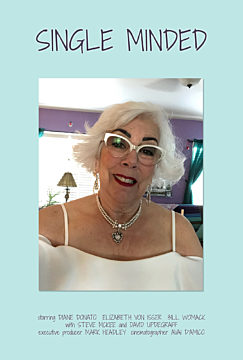 A feature comedy/drama based on Zelda, a senior citizen, age 71, still single for longer than 30 years after a divorce at age 33. Confident and independent, she is looking for Mr. Right, rather than Mr. Right Now. Her inner most conflict is within herself, as she wrestles with her free spirit self and her desires at times, to fit in with the rest of society by being in a traditional relationship with a man. She does, however, still believe that her soul mate is somewhere out there. She has been unlucky in love and has resigned herself to being alone, but periodically gives it “one more chance” and gets on a dating site. She is hopelessly attracted to younger men. The adventure into finding her soulmate begins with confiding with her girlfriends and getting on dating sites and all the conflicting views and people.