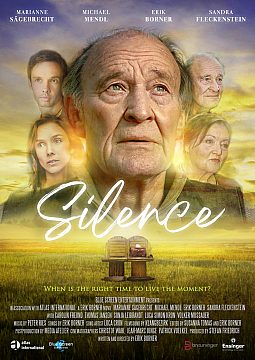 Take a seat and turn of your phone,….. relax... and let us take you on a voyage….
Inspired by a few youngsters in a coffee bar talking about aging, a middle aged man sinks into the idyllic surrounding of a lake. The lake is shown in the most beautiful colors of autumn. At this place the man seems to have turned into an old man who lingers and enjoys life at that unique spot. His thoughts and encounters at the lake seem to be inseparably linked with the man in the coffee bar and its visitors - This peaceful place at the lake is more eventful as initially thought. From a love story of a young couple on a bench and a chased jogger, to a little boy and all the emotions which the old man finds in his newspaper. Is it the yearning and longing for silence. Slowing down time that brings the man's thoughts in the coffee bar to this very special place at the lake instead of running his rat race of daily life? "Silence" is an homage to life which seems to pass by all too soon. A plea to live the moment and to take a break in order to see the seemingly little everyday occurrences and beauties of the day.