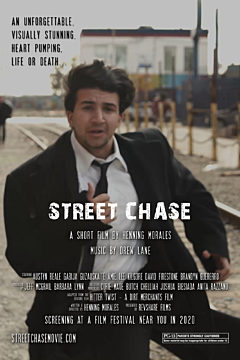 When a case of mistaken identity could lead to disastrous results. Thiago Mac is a twenty-something motivational speaker and teen idol. He is getting ready to take a train ride to his next gig when his travel plans get interrupted by a couple of ruthless mobsters who are after him for some reason. What happens next is a wild ride on an insane street chase through the freight train yard of 1990s Newark.

Fourteen time platinum music producer, Drew Lane, and pioneering filmmaker, Henning Morales, use heart pumping music, aerieal photography and unique 'running camera' photography to captivate the audience on this 30 minute action adventure with an unexpected ending. Street Chase is based on characters and a chase sequence in the feature film 'Hitter Twist' part of the 12 movie series The Dirt Merchants based on the bestselling novel of the same name. The Dirt Merchants Film series has been called a cross between The Breakfeast Club, The Sorpanos and Tony Robbins.