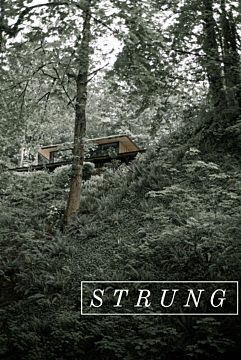 HAYLEY RESONAH, dreams of the car crash where she is distracted by an astral projection of herself and her daughter EMILY dies. Hayley is living alone in a cabin in the woods where she hides from society and carries out a daily meditative routine attempting to control decision- making.
Hayley sees DELILAH, a beautiful free-spirited hiking adventurist, travelling alone in the woods. An astral projection of Hayley runs out from Hayley and away into the forest as Hayley pleads “You can’t just take her, she doesn’t belong to you”. Delilah comes to Hayley's cabin, and apart from Hayley lying about her real name, they have what appears to be an immediate connection. Delilah is tired of being alone and doesn't seem to realise the odd way that Hayley responds to her, agreeing to her every suggestion in a spin tingling manner. As Delilah tries to get to know Hayley, she explains that she was a scientist who was practicing string theory experiments before coming out there to live alone away from people where she feels she needs to be. Hayley warns Delilah of her 'problems' and not to ask her to make decisions, but Delilah disregards this and seduces an intoxicated Hayley trying to convince her to travel the world together and they are intimate.

The next morning Hayley freaks out and starts having what appears to be a psychotic episode speaking to numerous versions of herself in different kinds of unseen arguments with Delilah as she tries to make her leave. Hayley seemingly imagines herself killing Delilah and also being stabbed by Delilah and then taken away. Hayley convinces Delilah to leave the cabin but not before Delilah takes Hayley's phone off 'aeroplane mode',

That night a distraught handsome man, JYE, comes searching for Hayley and Hayley hides from him until he leaves.
In the morning Hayley faces another version of herself which leads to a fight to the death over who will be allowed to stay in the cabin to ensure a 'fourth' is not created. While Hayley is digging a grave, Delilah returns, assuming that something terrible has happened and refuses to leave. Delilah discovers Hayley’s true name and tries to force Hayley to tell her what she is hiding. Hayley forces her to leave and then once again must face herself. Hayley talks with herself about her past and a past experiment to see herself in multiple universes is explained. Delilah returns and threatens to kill herself, and as manic alternate realities play before Hayley's eyes, she feels forced to call an ambulance as being the only safe bet. The ambulance drivers arrive and reveal that Hayley's husband, Jye, has a missing persons report out on her sending Delilah mad with jealousy. Delilah turns on Hayley and blames her for her injury, revealing all her secrets, and Hayley is taken to a mental hospital.
In the hospital, Hayley must face numerous versions of herself, including the dreaded psychotic fourth dimension version of herself, who treats murder as a form of art. Hayley learns that another version of her daughter is alive and waiting for her. Hayley tries to convince DR ROBERTS of her sanity, but she is not buying it due to a mental record previously reported by Jye. Hayley is put under and relives a memory where Jye is unsupportive of her sensitivities, and Hayley begins to believe that Emily is suffering from the same visions that she is. Jye forces Hayley with an ultimatum to drive to a counselling session with him later that day or they are over.
Delilah manipulates her way into Hayley's counselling sessions, Hayley loses it revealing all that she sees and has seen Delilah do to her in other dimensions. The other Hayley’s agree to work together to escape to recover the lone Emily and are trying to figure out how to break out when Delilah, who now believes Hayley and has stolen the hospital keys, helps them. Just as Hayley is to escape the hospital Dr Roberts stops them and Delilah sacrifices herself admitting how she lied allowing Hayley to escape to freedom while she is kept behind in the hospital.
Hayley returns to the cabin, where she finds a version of her daughter Emily. Hayley and her daughter leave to live in a new place in the woods together, but not before a seemingly alternate universe version of Delilah creeps out from the woods and watches as they go.