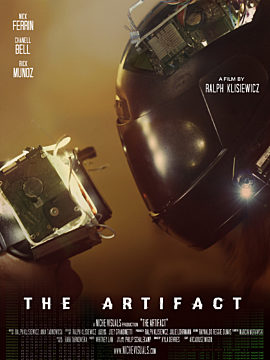 The Artifact (proof of concept for future feature film)

The award winning Artifact short was developed as a “proof of concept” for an upcoming feature length film. Martin and Steve use new technology that can record and transfer human experiences. They sell recorded experiences on the black market. Steve discovers that their technology has been hacked. An ARTIFACT with female characteristics begins to appear in his recorded experiences as a fleeting image. Steve begins to research the nature of the female ARTIFACT and his leads point to a world renowned hacker. Eventually, the ARTIFACT presents herself to Steve and explains her motives. She also implicates the other man, Martin, during the final climactic reveal. In the end, only one character survives.

The ARTIFACT explores the interplay of the three characters, each with their own distinctive motives. Steve is a brilliant coder who lacks purpose or connection to the world he is living in. He is recruited by Martin to build virtual technology that finds its way on the black market. When he finds the lead on the hacker he is intrigued and wants to learn her cause, maybe even join her. Martin, on the other hand, is an opportunist who sees Steve only as an utility to get ahead in the world. The hacker (the ARTIFACT) is only interested in developing her technology for consciousness transfer. Her technology is far superior to anything developed by coders such as Steve. She feels she has no equal, and consequently is a loner whose identity no one knows. She finds something intriguing about Steve’s code. There is something in his code that will allow her to complete her technology. Perhaps she is not alone in the world after all. Perhaps his code is complementary to her code and maybe there is finally someone that she can relate to, understands her, and understands the choices and sacrifices that need to be made.....even if the cost is life itself.