Home / Films / THE BEYOND MEMORY 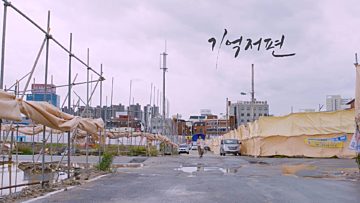 In a noisy town with issues arising from redevelopment, villagers for and against the redevelopment are divided, confronting each other. There lives a heroine named Sun-ja, a grandmother who has early-stage Alzheimer and frequently forgets to turn off gas and burns food. Her children visited her upon hearing the news of redevelopment plans. Her three children are after the compensation from her house, and they come to discover the existence of three gold toads left behind by their father. Sun-ja’s symptoms worsen as days go by while the three children fight to get hold of the golden toads. What will happen to Sun-ja’s family?

The film narrates a story told by actors happening in an actual village and its residents. The main background is the current Jungheung-dong Redevelopment Project taking place in Junghung 2-dong, Bug-gu in Gwangju City, and the theme of the film emphasizes the nature of family and community that deteriorates along with the demolition of the town of private homes, the characteristics of the town. To capture the challenge taken by actual villagers who act in the film, the director made the movie using a drama format describing their daily lives and produced roles and lines befitting the actor’s character.