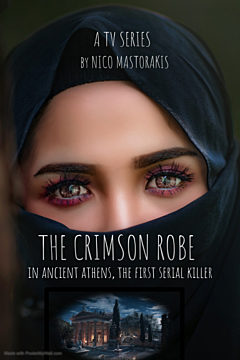 In ancient Athens, in the days that the Parthenon was completed, in Perikles' golden era, a series of murders are looking for the assassin. Are we dealing with the first serial killer in history? A widowed, lonely and troubled attorney turns detective, motivated by a bloody fingerprint, determined to get the mysterious "Crimson Robe" in a breathtaking cat-and-mouse game where the roles have not been defined. The procedural plays against a gloomy Athens, rarely visualised this way, in times of political intrigue, bribery, slavery and prejudice against women.

Ten episodes in development. A few words about the city, the times and the story:

It’s a drab city of mud brick houses. A land of lawlessness. Women are oppressed, confined to their homes or allowed just one profession -- prostitution. If a woman gives birth to a daughter, she will look away from her husband in shame. And the father can throw his unwanted newborn girl into the trash without punishment. Thieves and murderers are sentenced to death by crucifixion or tossed into a pit full of poison spikes. Every household has at least one slave, and since slaves don’t have any rights, they can be tortured, even killed. You cannot call the police, because there are no police. Yet, this is not some primitive third world country. This is Athens, 452 BC, during the golden era of Pericles. The center for the arts, learning and philosophy. Population: 40,000. Metics: 60,000. Slaves: 80,000. Serial killers: One.

And he wears a crimson robe.