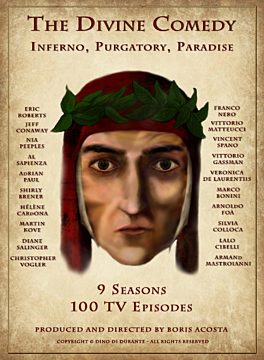 The Divine Comedy is a poem which was written over 700 years ago in Italy by Dante Alighieri. It is considered a literary masterpiece and the best poem of all time, which has influenced all artists since its conception. It is also known as the greatest Christian story ever written after The Gospel, which was endorsed by The Vatican centuries ago.

The Divine Comedy TV series is strictly based on the literary masterpiece poem, 1 canto = 1 episode, which are recited in Dante's own poetic words in primitive Italian, with English subtitles. The series is divided into 9 seasons, 3 for each part of the afterlife: Inferno, Purgatory and Paradise. Every season consists of 11 episodes, except for the first season, which is 12 episodes based on the first 12 cantos of Inferno.

The story is about several things, not just the afterlife as it is implied, but also it is considered the greatest love story ever written, the one of a man who went through the worst experience in his life to consummate his love relationship with Beatrice at the Gates of Heaven. Furthermore, it is about each one of us.

Purgatory tells us about a place where time exists, since souls are there to purify their souls and later move on to Paradise or reincarnate back into the same place. Dante is also guided by Virgil in Purgatory. Paradise tells us about "home", the place where all good souls belong and where we are supposed to have come from. Purgatory is divided into 7 terraces.

The whole story begins with Dante finding himself lost in a dark forest, who is threatened by tree beast, a lynx, a lion and a she-wolf. Virgil comes from the underground to protect him and guide him through Inferno and Purgatory at Beatrice's request, who descended to Limbo to give him this mission. Later on, Dante is guided by Beatrice through Paradise, which is divided into 7 heavens.