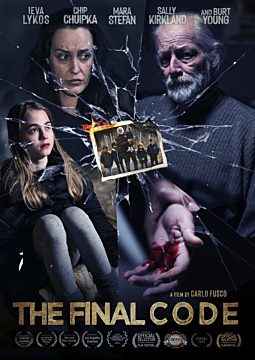 SHARON (35) lives locked in the basement together with her elder daughter , EMILY (12), with whom she suffers daily atrocities from her father, BUCK (60), who had forced her to live in captivity' since she was a teenager. Being often left without food and water, in a bunker all created by himself and where she got pregnant for other five times, the woman has seen her children being taken away , getting them upstairs, where Sharon's parents live a peaceful life as Buck had forced her to write a letter before disappearing, in which she announced that she would join a religious cult. The idea of seeing her sons is the only reason that she and her daughter are still alive. Despite some difficulties in learning, Sharon teaches Emily to read and write, hoping that, one day, she will get to see the outside world.
After giving birth to their seventh premature child, whom Buck lets die of respiratory failure, refusing to take him to the hospital, Sharon's attitude changes and starts to want to try to escape. She thinks up of a plan by writing a message on a piece of paper that Emily must hide it in her father's pocket. Strangely, Buck starts to be kind and attentive, bringing them food and a tree, wanting to celebrate Christmas together. The man changes his interest towards his daughter Emily, forcing her to have sex, too. He explains his decision as a punishment for their unforgivable betrayal. Taken in desperation, Sharon has nothing left to lose and begins to beat and insult the man who ties her up to a pole with chains, continuing to exploit her daughter-niece until he disappears for a week, time in which Emily manages to free her mother. On Buck’s return, he gets angry because of their disobedience so decides to turn- on the gas,
leaving them collapsed on the ground. When they wake up, they find themselves locked up in separate rooms, their only communication remains the space under the door that Sharon uses to play with Emily, teaching her a self invented encoded writing. Soon, the daughter begins to suffer from high fever and convulsions until she no longer responds to her mother that stands on the other side of the wall. After a few days of absence, Buck finds the girl laid unconscious on the floor, so he decides to free Sharon
so she can help him. As the girl was bitten by a rat, Sharon begs the man to take Emily to the hospital at the cost of never seeing her again. Buck accepts only when she threatens suicide. In helping him, Sharon inserts a piece of paper in her daughter's pocket - a sheet containing some of their drawings. Thrown in front of the hospital, the doctors find Emily in a wasted state, even missing teeth due to malnutrition. Everyone gets suspicious. There seems to be nothing left to do for the girl who, in the presence of a doctor, wakes up and hardly gets to decipher her mother’ s message that they have founded in her pocket - she succeeds reading their home address. The doctor picks up the telephone to alert the police. Buck gets arrested, Sharon is being freed. Emily closes her eyes. She passes on.