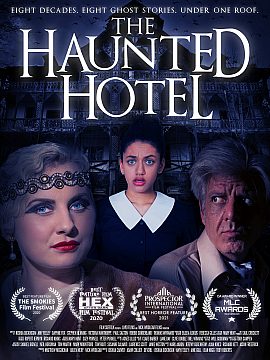 Eight short tales of ghostly encounters through the decades at the legendary Great White Horse Hotel in Ipswich. Since 1518, the premises have offered a night's rest to such diverse luminaries as Charles Dickens, George II and the Beatles. The Haunted Hotel brings together eight tales of ghostly encounters, by turns spooky, comic, humorous and horrifying, all taking place among the rooms and corridors of this notoriously eerie establishment. 1924 - The Contraption. A ghost-hunter meets her match when she tries to use the latest technology to detect the presence of unquiet spirits. 1973 - The Writer. A novelist seeks inspiration for his next bestseller but finds his mind unravelling as his work turns into a dangerous obsession. 1836 - Watching. Charles Dickens has an unexpected encounter during a sleepless night in the regions, reporting for a newspaper on a local election. 1952 - Room 27B. Young lovers find their plans for tryst thrown into confusion when they take a wrong turn within the hotel's labyrinthine corridors. 1968 - Ghost of a Chance. An incompetent spook struggles to impress his boss while employed as part of a 'haunted hotel' visitor attraction. 1997 - Housekeeping. A chambermaid pits her wits against a hotel room that appears to have a mind of its own. 1985 - 40 Years. A widower makes a reservation for a dinner date with the spirit of his former wife, who has sad news for him. 2020 - Devil Inside. Veteran crooks use the derelict building as a safe house after a bank job, but dark forces are conspiring to prevent them from celebrating their crime.