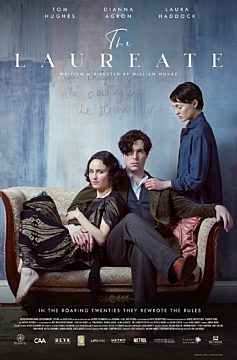 The true story of Robert Graves, the globally renowned author and icon of the bohemian 20’s was married when he began an intense and torrid love affair with writer and muse Laura Riding. This led to a menage-á-trois between the married couple and a new collaborator. The arrangement was further complicated with the arrival of handsome Irish poet Geoffrey Phibbs.

Tensions and rivalries reached boiling point, and culminates in Graves being charged with attempted murder. In the style of The Postman Always Rings Twice, Henry and June, and The Last Tango in Paris,

The Laureate is a passionate and unflinching tale of sexual awakening, obsession, and jealousy, set during the life of one of the 20th Century’s most admired writers.