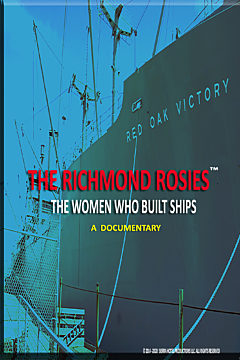 This documentary tells the stories of five women who traveled from various parts of the country to Richmond, California during World War II and became ship builders at the Kaiser Shipyards. At that time, the largest shipbilding facility in the world. Between 1942-late 1944, 747 Victory and Liberty ships were b uilt and launched from the Kaiser Shipyards. Nearly a ship a day.

These women didn't come to Kaiser Shipyards to become secretaries or personal assistants. They wanted to become welders, pipefitters, electricians and draftsmen. And they did. These women were part of the vanguard of women who were the first to enter the workplace and fill the empty spots that the men left as they went to fight the war. Without these women, it is safe to say, we migth very well not have won the war.

These are the women who built ships.